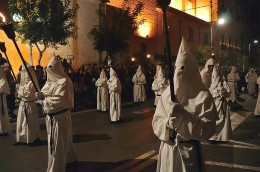 Sorrento, on Good Friday (Venerdì santo), changes its aspect: through the narrow streets of the historical centre you will not hear the voices of tourists but the solemn music of the funeral marches, the streets will not be invaded by cars but by long files of hooded people, the lights of the sign-boards will give its place to the lighted torches at the windows. In the Sorrento peninsula about 30 processions are organized on Monday, Thursday and Good Friday.

In Sorrento two processions are organized: the first one departing from the Annunziata church, is the Solemn Procession of the Visit to the “Sepolcri”, organized by the Main Confraternity of Saint Monica: it is also known as the “White” procession because of the colour of dresses and hoods worn by the participants and takes place in the heart of the night between Thursday and Good Friday. According to the popular interpretation, the Virgin Mary is looking for Her Son, who has been taken prisoner and sentenced to death. On the night of Good Friday, on the contrary, from the Church of the Servants of the Virgin Mary, the funeral of the Dead Christ starts. The hooded people of the Main Confraternity of Death, dressed in black as well as the statue of Our Lady of Sorrows, carried in the procession, follows the sculpture of the Dead Christ, representing the finding of the Son by His Mother. The first one is certainly more evocative and impressive, also because it takes place in the darkest hours of the night, the second one is more solemn. 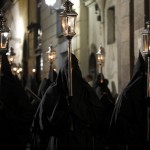 The processions are opened by the music bands playing the sad and solemn notes of the funeral marches. Also there are the symbols of the confraternity: the “pannetto” (roll) and the “vela” (sail), the small Crosses, carried mainly by children, and the mysteries, symbols of the Passion of Christ ascending to the Golgota. The hooded people who walk slowly and solemnly, are more than 500; everything in the dark with only the light of the lamps and torches, giving the procession an atmosphere of unique misticism. It will be difficult to hold your emotion hearing the Miserere, modulated by 200 singers. But the most touching moment is when the Virgin Mary statue is carried in procession following Her Son, whose statue is a real masterpiece of the 18th century sculptured in wood.

Of an unknown author, the statue of the Dead Christ, visible in the Church of the Servants of Mary, could have been made, according to the popular legend, by a man condemned to death who took refuge in the Church of the Main confraternity of Death and payed his debt with the confratelli making this real masterpiece. It is difficult to explain to a foreign visitor the deep meaning of these processions for the Sorrentine people. Far from being a folkloristic evidence they are together popular faith, tradition, love to the own historical and cultural roots. Don’t be surprised if in the heart of the night you see small children taking flowers to the statue to Our Lady of Sorrows. Don’t be surprised if groups of children, at 4 o’clock in the morning have the strength and voice enough to break the silence of the night singing with all their lungs the hymn to the Lady of Sorrows. It is the tradition going on. It is the continuation of a ritual made before by their parents and grand parents.

For Sorrentine people the processions are unmissable and represent the essential meaning of Easter. Once the procession has ended and it goes back to church, good willings are exchanged.
Don’t miss Easter in Sorrento!