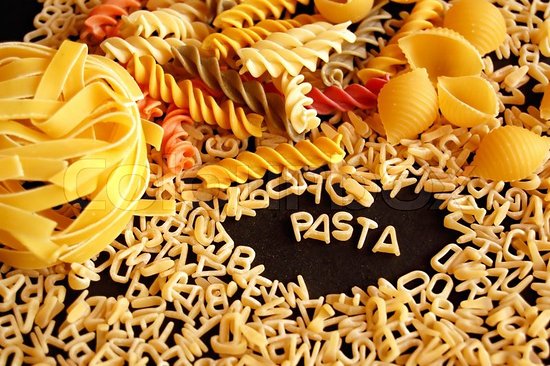 Italians are so obsessed with their pasta that they actually created a chart to classify every type according to its structure, it’s lenght or its texture: it’s basically a pasta periodic table! That said, it is not surprising that many Italian language students have an hard time to recognize and name even the most common varieties of pasta, due to the fact that Italian words for pasta, although often containing open references to its appearence, usually originate from a dialect word. Moreover, some kinds of pasta have a different name for almost every region, to the point that you might be misunderstood if you ask for stortoni in Rome or maccheroni in Milan.

You might think that internet can help, but this is not always the case. Just take a look at this infographic, available in any major stock photo website. 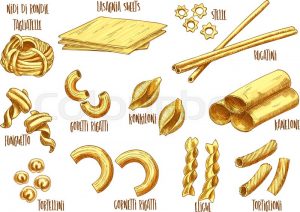 Mistakes and misspellings in this artwork are so numerous and so hilarious that one could actually think they were made on purpose.

Let’s analyze them in details and try to learn some Italian from them:

Nidi di rondie: besides the fact that nidi di rondine are actually a particular way to cook tagliatelle, the author of this infographic just forgot an n.
Lasagnia: hey! In Italian language, the palatal sound (/ɲ/) is never followed by a diacritic . Thank you. ?
Funghetto: pasta names are always plural. And that should be pretty obvious, since in every box you can find many pieces of the same variety of pasta. Just to try to search on Google “funghetto pasta” and “funghetti pasta“: can you spot the difference?
Gobetti rigatti: the author of this image had so many problems with double consonants! Which is normal and understandable, considering that double consonants in Italian language have an importance which has no equivalent in any other European language. That said, the correct form is gobbetti (from gobba, hunchback) rigati (striped).
Konkilioni: in the Italian orthography, the stop velar sound /k/ is represented by the letter c, possibly paired with an h when followed by a palatal vowel (e or i). Moreover, this word poses another difficulty for foreign students, since the lateral sound /ʎ/ (similar to the one you find in Spanish caballo) is very specific to Italian language and  is always written using the diacritic sequence (as in aglio, figlio, moglie, gli). Therefore, the correct form is conchiglioni.
Kanellone: again, /k/ sound, double consonants and plural instead of singular. Correct form is cannelloni.
Cornetti rigatti: cornetti (from corni, horns) rigati.
Elighe: almost correct, except for the confusion between voiced and unvoiced stop velars, /k/ and /g/. In this case, the sound is unvoiced: eliche (literally fans).

Now, we really want to set the record straight. That is why we prepared a new infographic with our favourite types of pasta in the hope this will help you through the labyrinth of the pasta periodic chart! 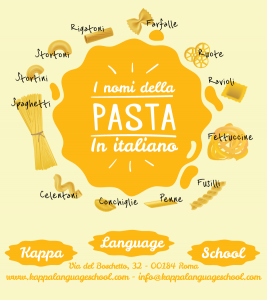 Italian VS English- idiomatic expressions: hit me with the phone! 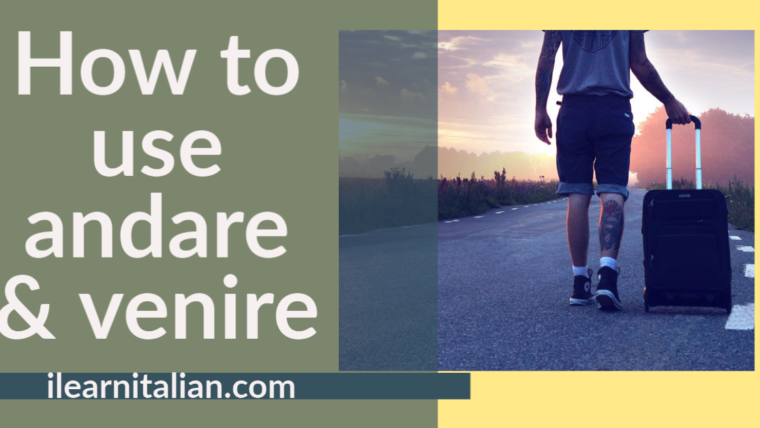