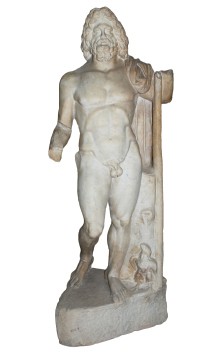 This stimulating exhibition, spanning two millennia, juxtaposes antiquities from the important archaeological site of Ostia Antica, near Rome, with the work of two modern Italian artists: Umberto Mastroianni (1910-1998) and Ettore de Conciliis (b. 1941).

Founded in the 7th century BC, the ancient harbour city of Ostia was an essential link to the capital of the Roman Empire. At the mouth of the river Tiber, southwest of Rome, the city was a commercial hub and cultural melting pot, equipped with a theatre, baths, bakeries, warehouses, bars and shops. The exhibition includes ancient statuary portraying gods, emperors and evocative scenes of chariot races at the Roman Circus, while a selection of intricate mosaics and two wall paintings from nearby Isola Sacra – Ostia’s cemetery – are among the finest examples from the site.

SAVE THE DATE:7th November  a guided tour in Italian in the Estorick museum